How do COVID-19 models work, and what do they tell us?

Models have influenced key policy decisions from the onset of the COVID-19 pandemic.

These models are used to estimate infections rates and mortality rates from COVID-19. Estimates from these different models may vary widely. Part of the reason is that different input values are used in the models, and modelers are making different assumptions.

These include assumptions about the infection fatality rate (% of people infected with COVID-19 who will die), the case fatality rate (% of people who will die of those who tested positive), incubation period of the disease (the length of time it takes for someone who has been exposed to the virus to show symptoms), transmissibility (how likely it is you will be infected through contact with someone who has the disease), and severity of infections.

There are a variety of models being used. Two influential models, the IHME’s model coming out of the University of Washington and the Imperial College of London’s NPIM, have dominated the national conversation. However, the White House’s coronavirus task force has not released a singular model to guide the national response to the pandemic.  There are also notable models from Los Alamos National Laboratory , Northwestern, and Columbia University . At a state level, state leaders are using a “weather forecasting” approach combining several models, often using the IHME’s model, to better predict outcomes.

As more data emerges from the COVID-19 pandemic, especially with regard to virus transmissibility, models are updating in real time to reflect these changes. Social distancing, a key factor impacting infection rates in each state, has become a prominent component of the core assumptions underlying model forecasts. This appreciation for the ability of social distancing guidelines to ‘flatten the curve’ initially led some models, like the IHME, to project decreased total deaths due to COVID-19.

However, in light of loosening restrictions across the majority of the United States, models have revised their forecasts to predict a significant increase in mortality rates as new cases are expected to spread. At the same time that state and federal leadership argue that the pandemic is coming under control, models, incorporating better data, suggest the opposite – making their increasing accuracy that much more important to inform policy decision-making.

The Imperial College London model forecasts the number of deaths in the upcoming week by country and analyzes case ascertainment per country.

The NPIM projected 2.2 million US deaths might occur in an “unmitigated” scenario, whereby transmission suppression policies were not instituted to slow or prevent spread of the virus. This initial estimate, published on March 17th, was among the first distributed to the White House, prompting the US government to take drastic actions, such as extensive travel restrictions, to mitigate the spread of the virus.

It is a transmission-based SIR model. Like other SIR models, this model examines individuals/groups of individuals — e.g. school children, household sizes, and workplace distributions — according to population density data and census data, as well as their set of contacts, to simulate transmission rates in a community. This model examines the number of projected US cases and deaths. The model makes forecasts over the next year until April 2021.

The model’s main objective: Forecast the number of deaths in the week ahead for countries with active transmission.

The secondary objective: to analyze case ascertainment per country.

The key assumptions behind the model are:

The Imperial College London Model uses 3 different models, each of which deploys complex mathematical modeling with differing assumptions about how transmissibility changes throughout the time window of interest.  These 3 models that estimate transmissibility are being averaged to create a final model for each country.

A previous version of the model was somewhat different, and included assumptions that are no longer used in the current version.  It examined the number of projected US cases and deaths across a range of various mitigation and suppression scenarios. It made forecasts over the next year until April 2021.

The assumptions in the prior version of the model were: 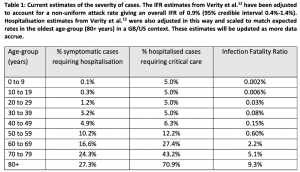 The Imperial College London previously integrated different Non-Pharmaceutical Interventions (NPI) into their modeling to determine the best policy strategy to control COVID-19. These NPI are no longer included in the model. Rather, the model relies on current data and transmissibility estimates.

The previous version of the model included these Non-Pharmaceutical Interventions (descriptions in Table 2, from published model): 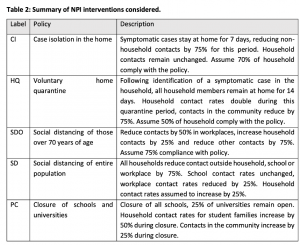 Relative to each NPI intervention, the model uses the described assumptions to provide the following output predictions:

The IHME’s model, from the University of Washington, is a curve-fitting/extrapolation model based on statistical mortality growth curves of the disease, not based upon the underlying epidemiology of the disease. The model relies on reported statistics of the disease, such as worldwide COVID-19 deaths, and then extrapolates similar patterns in emerging death data from the US and other countries to forecast anticipated deaths from the virus. Initially the model used trending curves of death from China but has since updated that information to include COVID-19 mortality curves from Italy and New York, for instance.

The IHME model has been greatly enhanced since its inception. Most notably, the model is integrating social distancing policy data by country into the model. The model projects infections and testing that is occurring to better inform public health officials who will be making the decision as to when to ease social distancing.

Mobility is one of the main indicators of social distancing in this model. Defined as personal movement by a population, mobility is based on anonymous cellphone data made available by technology companies. There is a direct correlation with high mobility and high risk of spreading COVID-19.

The model indicates that, after the inclusion of social distancing modeling, there has been a marked increase in death estimates. This is attributed to the states that have begun easing social distancing without curbing the COVID-19 pandemic in their area or increasing testing capacity to match the rate of infections.

The IHME model is reporting data for all countries, except Ecuador, via the aforementioned model which integrates social distancing metrics (aka mobility), COVID-19 deaths, cases, and testing. Interestingly, in Ecuador, the case rate is statistically too low to be accurate. To accommodate for insufficient data, the model has used trends in mortality to extrapolate the contribution of COVID-19 to excess deaths seen in 14 European countries. This data indicates that 55.3% of excess deaths are due to COVID-19. Thus, the model is assuming this proportion of Ecuador’s excess deaths to be due to COVID-19.

The key input assumptions behind the IHME’s model are:

The model uses these assumptions and previous trends to forecast:

Using this model’s early data on the effects of early social distancing guidelines given in March, the White House released estimates that between 100,000 and 240,000 Americans, instead of millions, may die from coronavirus – after the implementation of social distancing, these estimates had been revised downwards under the IHME’s model. However, with states reopening nationwide, it is expected for these estimates to increase again.

The main criticism of this model at its conception was that it assumed the effects of social distancing are equivalent across different countries. The model was based upon viral spreading curves from countries like China, where the stringency of social distancing laws was dramatically different than the US, for example. Furthermore, the model assumed these restrictions were not only consistently implemented in each region but also that they would remain effective throughout the regions of interest for the entire duration. These assumptions are no longer required with the introduction of social distancing data from mobile devices.

This model, like the Imperial College London, is a metropolitan SIR or SEIR model. Fundamentally, its assumptions are based on social distancing measures and how they will change in the future. Complex mathematical equations estimate day-time and night-time transmissibility. Movement of people within counties is estimated by SafeGraph, a tool that forecasts the reduction of inter-county visitor numbers in points of interest, such as restaurants and stores. Delay in reporting of cases is also estimated within their mathematical calculations, similarly to the Imperial College London model.

The assumptions of the Columbia model include:

The model reports a variety of outcomes including:

The Los Alamos National Laboratory (LANL) Model, developed by the Los Alamos National Laboratory, a top-tier government research laboratory, is a statistical growth model. This model is different from those previously discussed as it does not make assumptions about how the virus is spreading. Instead, it forecasts the rate at which the virus will continue to spread. Inherently, this paradigm then allows for fewer assumptions to be made than other COVID-19 models. Consequently, this model is less susceptible to mistakes due to core assumptions. These statistical growth models are sensitive to changes in virus conditions, and such changes may be caused by forces independent of the virus.

The model forecasts future confirmed cases and deaths based off of data from the JHU Coronavirus Resource Center Dashboard. These forecasts, provided on a state-by-state basis in the United States, is accompanied by estimates of the peak surge in each state.

Levels of uncertainty in this model originate from: