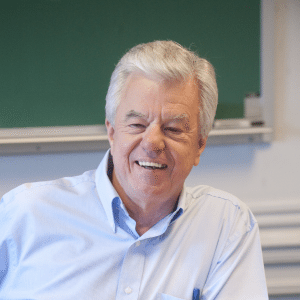 Dr. Beauchamp is Professor Emeritus of Philosophy and Senior Research Scholar Emeritus, Kennedy Institute of Ethics, Georgetown University. He was born in Austin, Texas. He took graduate degrees from Yale University and The Johns Hopkins University, where he received his Ph.D. in 1970.

Dr. Beauchamp’s research interests are in the ethics of human-subjects research, the ethics of animal-subjects research and human uses of animals, the place of universal principles and rights in biomedical ethics, and methods of bioethics. He has published extensively in all of these areas. In addition, he is one of three general editors of The Clarendon Hume, a set of critical editions of the works of David Hume.  He has himself edited five volumes of critical editions of Hume’s philosophical works for the Clarendon Press (of Oxford University Press).

Publications include the co-authored works Principles of Biomedical Ethics (OUP, 8th edition, 2019) (coauthor James Childress), A History and Theory of Informed Consent (OUP, 1986, coauthor Ruth Faden), and The Human Use of Animals (OUP, 2nd edition, 2008, with four coauthors). In 2020 Oxford University Press published his Principles of Animal Research Ethics (with coauthor David DeGrazia).  Many of his published articles on biomedical ethics were collected and republished in 2010 by the Oxford University Press under the title Standing on Principles: Collected Works.  Beauchamp has also co-edited (with R. G. Frey) The Oxford Handbook of Animal Ethics (Oxford University Press, 2013).

In 2011 Dr. Beauchamp was given the Lifetime Achievement Award for Excellence in Research Ethics by Public Responsibility in Medicine and Research (PRIM&R).  In 2010 he was presented the Henry Beecher Award of the Hastings Center, New York, for a lifetime of contributions to research ethics and other areas of bioethics. In 2004, he was given the Lifetime Achievement Award of the American Society of Bioethics and Humanities (ASBH) in recognition of outstanding contributions and significant publications in bioethics and the humanities. In 1994 Indiana University made Beauchamp the first award winner of its “Memorial Award for Furthering Greater Understanding and Exchange of Opinions between the Professions of Law and Medicine.”  In 2020 The University of Tübingen (officially the Eberhard Karl University of Tübingen) in Germany announced that when international travel permits, it will bestow an honorary doctorate on Dr. Beauchamp and on his coauthor Dr. James Childress for their influential work in biomedical ethics.