This special presentation of Antigone in Ferguson on Zoom will foreground the perspectives of people in Baltimore, Maryland whose lives have been impacted by racialized police violence and health inequity. The performance is free and open to the public; Register for this free Zoom event.

The project was conceived in the wake of Michael Brown’s death in 2014, through a collaboration between Theater of War Productions and community members from Ferguson, MO, and premiered at Normandy High School, Michael Brown’s alma mater, in September of 2016, and has since toured the country and the world. In light of the uprising and protests catalyzed by the killings of Ahmaud Arbery, Breonna Taylor, George Floyd, Tony McDade, Dion Johnson, and many others; and the disproportionate impact of the COVID-19 pandemic on black and brown communities, Antigone in Ferguson aims to generate dialogue, consciousness, compassion, outrage, understanding, and positive action at this critical moment.

“When we last presented Antigone in Ferguson in Baltimore at Coppin State University in January of 2017, close to a thousand people showed up, of all races and backgrounds, for a dynamic, heated, powerful discussion about racialized police violence and social justice framed by Sophocles’ ancient play,” said Bryan Doerries, Artistic Director of Theater of War Productions.

“We are excited to be working with Johns Hopkins University, the Greater Baltimore Cultural Alliance and other local partners, now on a digital platform with the capacity to engage thousands more in Baltimore, to curate a community panel and audience that reflects the challenges and resilience of diverse communities in Baltimore, centering the discussion on the perspectives of individuals and families whose lives have been directly impacted by police violence and health inequality.”

All of Theater of War Productions’ events follow the same format: 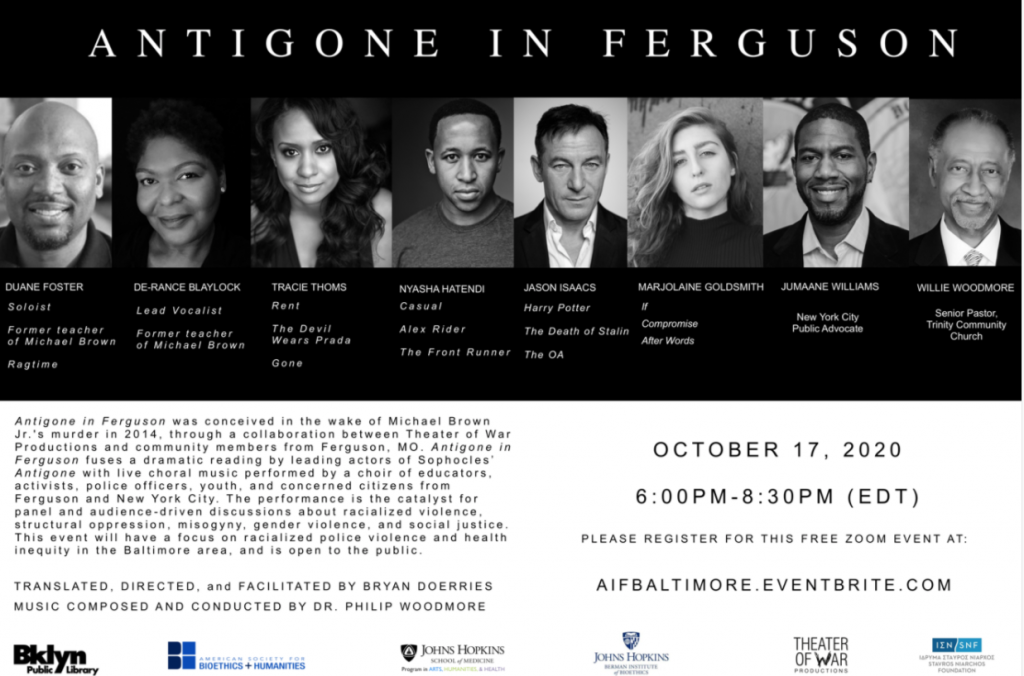